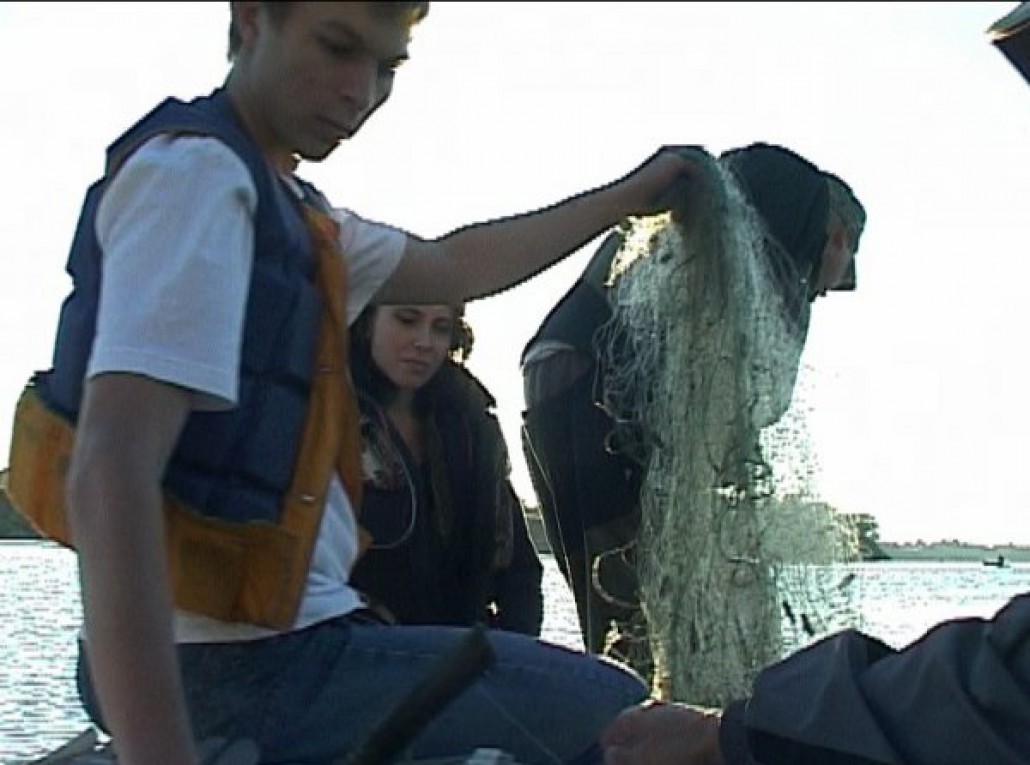 In the Herzen library visitors can see an exhibition of photography exploring the theme of water. It marks the World Rivers Day. Among the participants are notable Kirov photographers Sergey Yuferov, Max Irman, Igor Noskov, Yelena Okhapkina, Konstantin Lavrov.

(An article by Yekaterina Lavsanova, 6 October 2015)

Yezhovsky lakes and springs is a well-known area in the historical center of the Kirov city. It comprises about 20 springs feeding into an elongated lake, all belonging to the Vyatka River’s basin. Bank augmentation work is underway to expand the city’s lands to build on. Already, there sit a couple of buildings, with one part of the bank being reprofiled as a ski and sleigh slope. With dump trucks full of earth and rubble coming in every week, the process is not expected to stop any time soon. However, due to the nature of the springs, many question the viability of the undertaking, whether the augmented river bank will not be washed off into the lake by the workings of the springs underneath. Vyatkakeepers oppose this development, deeming it reckless at best, and criminal at worst.

Vyatkakeepers’ priority for 2014 was to focus on industrial and sewage pollution and development of the volunteer network hoping to leave the tidying-up of river banks to district administrations. No such luck! Complains kept coming in from the citizens and supporters, so we continued to go to places, take pictures, report cases to authorities, and take action in general.

One story is worth telling. The Khlynovka Riverkeeper Dmitry Derunov went to explore the Lake Russkoye, together with the banks of the Mokhovitsa and Khlynovka. He found the lakeshore littered with trash left by holiday makers and construction workers. Large amounts of glass shards were observed. The good part is that no fishnets were found.

It is unthinkable how this lake that is home to, among other things, endangered plant species, has become no more than a barbecue destination for so many people. It is not easy for an organization already stretched very thin to deal with everything, but the lake Russkoye remains on our radar still. Raising awareness in the years to come should be the priority because most problems are easier to prevent than to deal with.  Surely, making people mindful of the value of natural objects around them is key to alleviating the suffering of small bodies of water found in dangerous proximity to the city of Kirov.

On September 30, 2015 the Vyatkakeeper volunteers marked the World River Day. We betook ourselves to the Vyatka River’s bank to give it a clean-up, and set free a sturgeon and 3 carps.

In spite of drizzle, our volunteers found determination to show up, and the event was no washout. Оne of the leaders, put it, there was a good side to the fewness of people, they were few and got to work right away, not wasting time on chatter. Which they put off till the work had been done, and tea steeped.

This wasn’t the first such event in Kirov, but actually the third running of the event, always organised by Vyatkakeeper. Such events send a powerful message to all who care, and remind people that it is easy to join our ranks.

(Based on an article in the Komsomolskaya pravda newspaper, 30 September 2012)

0
Vyatka riverkeepers koordinator dived into the Ploskaya river surrounded by local journalists and bloggers. Grigory Pjskrebyshev said: «I dive near pipe with sewage from treatment plants by «Kommunalshik«.
Ploskaya riverkeepers programm worked since 2009 year because Ploskaya was very dirty, a lot of  dead fishes. We made scandals in local newspapers, tow meetings with local residents, officials, representatives of the company,  journalists  on the rivers bank and much more.

When it came to saving the river in their hometown, graduate student-activist Grigoriy Poskrebeyshev and artist Vera Minina knew that only a grassroots revolution would do. After meeting in 2005, the young duo launched Vyatka Riverkeeper in one of Russia’s northernmost cities, Kirov. Many years later, Grigoriy and Vera continue to pave the way as a program of Waterkeeper Alliance in Russia.

Determined to learn the truth about environmental threats in his own region, Grigoriy, then an undergraduate student, set out to see it all for himself. Hitchhiking to protests, events and national parks, urgency and inspiration fueled him as he made his way to Moscow. Here, Grigoriy stumbled in on a meeting of one of Russia’s first green parties, simply knows as “Green Russia.” Later, Grigoriy was elected as one of the party’s regional representatives and currently serves as a well recognized member of Yabloko (Apple), Russia’s leading green party.

Once back in Kirov, Grigoriy resumed his studies at the local university where he met fellow student, artist and environmentalist Vera Minina. As a candidate in the field of Natural Resources and Economic Policy, Vera knew that Kirov needed a comprehensive approach to environmental restoration, conservation and education. After learning about the Waterkeeper Alliance model of watershed protection, Vera saw the potential in applying its principles. The thought of losing the river so prominent in her childhood memories was unbearable. But like all great undertakings, she knew she couldn’t do it alone.

Back on campus, Grigoriy’s name circulated as stories about his travels and environmental thought spread. Vera decided to contact the Grigoriy. The partnership was fated to start yet another Russian revolution – a river revolution. “Through it all, Vera is the person that has supported me the most and I know will continue to do so, no matter what,” says Grigoriy, who now spends more time on the water while Vera, her husband and daughter reside in Moscow.

In Russian, Vyatka is written as Вятка, stemming from the ancient word “вяче,” meaning “larger than.” In turn, the river is one of the largest tributaries of the Kama River feeding into one of Russia’s largest and most famous rivers, the Volga. By early November the river freezes up and remains under ice until mid-April. For locals, the sturgeon was symbolic of the river as one of the many species living in its waters, long before Vera and Grigoriy introduced the coincidental Waterkeeper Alliance logo.

Every summer, paleontologists sift along its banks while families spread out towels and drop in fishing lines. One of the program’s recent initiatives, Project Revival of the Vyatka River, focuses on restoring the health of smaller streams feeding into the Vyatka. “While investigating the watershed, Grigoriy and I stumbled upon unmapped streams that were strangled with garbage or coated with oil,” remembers Vera, “we were shocked.”

Mobilizing and empowering Kirov’s youth is another priority for Grigoriy, “students and young adults are this city’s most active residents,” he reminds us. Members of EcoPolice maintain the cleanliness of urban green space and watershed territory. Candidates at local universities are invited to participate in studies of the Vyatka river, giving future ecologists opportunity to implement their classroom knowledge. In 2010, Vyatka Riverkeeper received funding for a 10 day paleontology themed summer camp which hosted forty participants. Harnessing media, Vyatka Riverkeeper regularly hosts documentaries and movies related to themes of environmental conservation through its “Cinema Club.” Moreover, the end of each showing opens up the room for discussion, possibilities for new partnerships and fundraising.

“We always saw Vyatka Riverkeeper as an ethnic project, not just an environmental one. We want to connect people to their rivers because the water on land is like the blood in our bodies, it is essential – it tells our story and connects us all,” passionately explains Vera. Over the next five years, she will work with Grigoriy to publish “One Thousand Russian Rivers,” a collection of stories and legends told by locals about Russia’s smaller, less known rivers like the Vyatka. “Our vision is bridge generations through citizen fueled research for this project. We believe it will instill a sense of pride and responsibility for the well being of rivers in Russia,” tells Vera.

Looking to the future, Grigoriy brims with excitement. “I want to see the Waterkeeper Alliance movement in Russia grow,” he adds, “and I don’t see any reason why it won’t.”

Earlier this year, Vyatka Riverkeeper identified 3 major corporate polluters on the Vyatka River: ARTEKS, Agrofirm DORONIGHY, and KKS. Thanks to Riverkeeper Grigory Poskrebyshev’s regular water patrols and interest from local television stations, the organization has been able to collect enough hard data on these polluters to pressure local environmental authorities into opening an investigation.

Vyatka is proud of this recent public action because of the renewed spotlight cast on local water issues in Kirov City. Since the show aired, the organization has managed to initiate a number of new outreach and advocacy projects, including a new city-wide trash cleanup tradition known as the Day of the Vyatka River. The recently-observed International Day of Action for Rivers allowed Vyatka Riverkeeper to take another giant leap forward after the organization managed to clean up a large portion of the Vyatka’s coastline and launch a new sturgeon logo designed to represent its work. Recently, Vyatka Riverkeeper staff also attracted a large crowd for a charitable concert river pollution lecture at the Kirov City library and organized a  fundraising exhibition and photography sale for a new project known as Project Revival of the Vyatka River.
Waterkeeper Alliance Member Organization Newsletter
0
Загружаются Комментарии...